This singer has been performing as a David Bowie tribute artist for years. His performances have been greatly enhanced following his appearance on Granada Televisions's "Stars In Their Eyes". Since then, he has built a repertoire of some of Bowie's greatest songs.

He has performed to both large and small audiences in theatres, film premieres, and even touring Spain. His unique talent is appreciated by the most hardcore of David Bowie fans, being well known among them.

If you want a top quality performer for any occasion, then this tribute is the next best thing to the man himself. 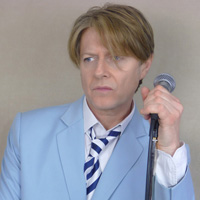 Almost David Bowie performs the greatest hits of David Bowie, from every era of 'the guy's' career from the 70's through to the nineties and beyond.

He performs solo, or backed by a fantastic band of experienced, pro musicians to provide a pulsating night of pure, authentic Bowie!