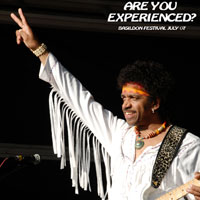 This band were formed over 11 years ago and in that time they have become widely regarded as just about the best Jimi Hendrix tribute show you will see. The band are proud to be playing the timeless music of Jimi Hendrix, providing some nostalgic moments for those lucky people who actually witnessed Jimi in the flesh and recreating some of the magic for a new and eager audience.

Catch them when they come to town and relive the excitement and explosive of this show. Let the band take you through all the favourites like 'Hey Joe', 'Voodoo Chile', 'All Along The Watchtower', 'Foxy Lady' and 'Little Wing', culminating in the guitar-burning finale of Wild Thing.